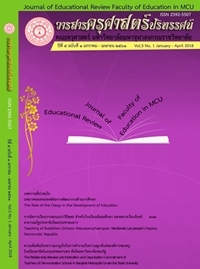 This was the experienced research in the model as the one group
pretest/posttest design. Its objectives were 1) to study the teaching the
Yonisomanasikara Approach in the Secondary School Named Wat Maechoei, Uttaradit
Province and 2) to compare it before and after learning on this topic as the
Buddhist’s Holy Days. The data was collected by the test forms. Its analysis was used
by the computer program with the software. It was the descriptive statistics that was
the means, the standard deviation and the inferential statistics, because the score
comparison of the test from the learning package before and after by analyzing the
difference of the paired sample t-test
Findings were as follows:
1. The teaching the Yonisomanasikara Approach in the Secondary School
Named Wat Maechoei, Uttaradit Province was interesting to students who could
reasonably study together with the group and the small groups, present, make the
questions, and share the knowledge each other according to the Yonisomanasikara
Approach.
2. The learning achievement was after learning the higher score than before it
and it the statistic significant difference at the level 0.01 in this school of students
who learnt the first learning unit on Magapuja Day, the second learning unit on
Vesakhpuja Day, the third learning unit on Asalhapuja Day, the fourth learning unit on
Buddhist Lent Day and the fifth learning unit on End of Buddhist Lent Day.