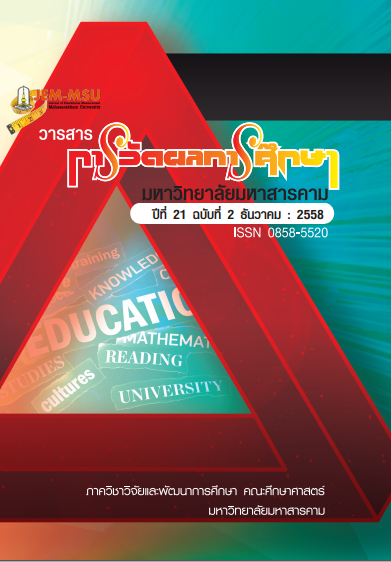 The purpose of this research was to study the influence of Disney movies on
in young children. The participants consisted of 2nd year kindergarten boys and girls
aged 5-6 years in the first semester of 2014 academic year at Anuban Amnat Charoen
school, Amphoe Muang Amnat Charoen, Amnat Charoen province. I recruited the
participants by using simple random sampling method. Three sources of data were
utilized for this study. The instruments were the early childhood ethic development
test, the observation, and the lesson plans. Data was collected and analyzed as a
whole at the end of the study and was allocated a number for purposes of data entry;
therefore, confidentiality of information was preserved. All analyses were performed
using the Statistical Package for the Social Sciences (SPSS) computerized software
program. The data analyses were conducted by the frequencies, percentages, mean
scores, and standard deviations and Independent t-test.
The research revealed that after the young children were exposed to the
Disney movies, their ethic development was at the very good level and was
significantly different than prior to the experiment at .01 levels. It can be concluded
that Disney movies have an influence on children’s ethic development.