Academic article “Communication for Youth Promotion, TO BE NUMBER ONE Project, Southern Region Ubonratchathani Rajakanya Siriwattana Phanwadi “aims to study the promotion of youth to the TO BE NUMBER ONE project in the southern region in response to Phra Damri, female Ubonratana Rajakanya Siriwattanapanwadee by the benefits of education in the context of the concept of science. Of the King and His Majesty King Bhumibol Adulyadej’s royal speech to the Thai youth It is also leading to the information of Phra Damri, the woman of UbonRatana Rajakanya Siriwattana Phannawee and the innovative academic communication information that is conducive to the To Number One project, which is a campaign to prevent and solve drug problems. In the female noble Ubonrat Ratananya SiriWattana Phannawadee He is the president of the campaign to prevent and resolve drug problems in the context of the campaign to raise awareness and create a trend that is conducive to the prevention and resolution of drug problems, enhancing mental immunity for youth in the community and Development of life skills and prevention and aid networks and as a cost base of competitive ability, driving the youth sector at the level of International and global In addition. 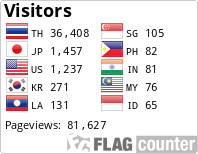