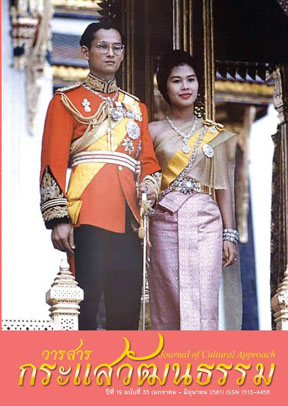 The objective of this research is to study about concept characteristics and identity of Khon Chalermkrung and to describe factors affected them.

Khon Chalermkrung is a Khon troupe which performs in Sala Chalermkrung Royal Theater, under supporting of Royal Institute. Main audiences of this Khon troupe are foreign tourists. They create comprehensible and interesting Khon, telling story by images rather than words. Another objective of Khon Chalermkrung is to dedicate their performances to Royal Institute, which is supporter of the Khon troupe. Even though they want to make Khon in unique and contemporary style. They still concern about preserving Thai cultural heritages. These objectives construct framework for Artists to follow.

Although they want to make a new style of Khon, using new technique and try to present Khon in a new way. But this study found that a lot of ideas are influenced from many kinds of past performance.  Especially, Khon of Department of Fine Arts.