Food and water borne diseases, including acute diarrhea, food poisoning, and cholera, are life-threatening since the former time and can emerge throughout the year. The Ministry of Public Health has continuously made an effort to promote preventive behaviors by launching a remarkable slogan reading “Eat Hot, Use Middle Spoon, Clean Hand More Often”. These diseases derive from infected ingredients, cooks, food containers, as well as unclean environment for food preparation. Therefore, the purpose of this study is to explore the influence of various media on people's knowledge and behaviors for the prevention of food and water borne diseases. The data collection was made by the interview form which addressed the sample group totaling 416 persons nationwide at the age of 20 years and over.

The findings of the study revealed that the behaviors of the sample group for the prevention of food and water borne diseases were related to various media accessibility publicized by Bureau of Risk Communication and Health Behavior Development, Department of Disease Control, Ministry of Public Health, i.e. stickers provided for people to place in their kitchens and food consumption record manuals. In addition, the behaviors for the prevention of food and water borne diseases also correlated with a variable of printing media accessibility, including leaflets, posters, newspaper, as well as personal media, i.e. public health officials (physicians, nurses, public health personnel), and people in the community, i.e. village health volunteers, with a statistical significance according to Pearson's correlation coefficient analysis. These media can be applied to promote and disseminate knowledge, as well as enhance specific behaviors of which people are not aware, such as middle spoon usage behavior requiring an emphasis and cooperation from other people in adjusting middle spoon usage behavior concurrently, in order to bring about the norm acceptable to people in the society, and minimize food and water borne diseases, as well as lift up people's quality of life. 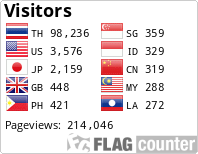