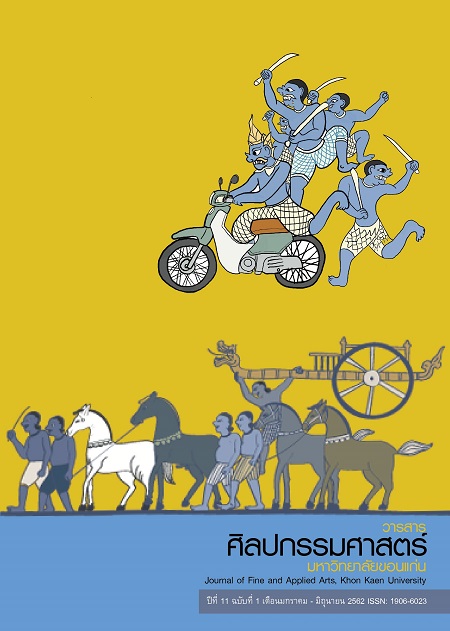 The research findings are as follows. The Nora Kaek of Pong Pee Nong Troupe in Narathiwat Province mostly performed in the three southern provinces and it was found that combinations of the performance included the ritual, belief, dance and music all together. The troupe was founded in 1946 by Mr. Juan Junkong and Mrs. Chip Juntem. It was called Nora Kaek of Pong Pee Nong S. Por Nu S. Kwan Kaew, Narathiwat Province. The troupe has its old history going back 71 years, and recently Mr. U-dom Kaewwicean took part as a troup manager or Nai Rong. The performers consisted of Mor Kho Lo (master of the troupe), Por Nora (the troupe headman), young dancers, the Buddhism dancers, the Muslim dancers, Nai Pran (a hunter), and musicians. There were a total of 11 troupe members.  The languages used in the show were the southern Thai dialect switching with the local Malay (Melayu) language and sometimes Jeh Hey’ language (the local language used among Buddhists in the three southern provinces of Thailand) has been used in the performance. The band included Klong TuK, Tab, Mong, Cing, Thon, Sue Rue Bab, Pee Su Na, and Tae Rah. The props consisted of Mad Wai,  Meet Krok, Pra Kan, and Nah Nai Pran. The popular stories were Pra Ya Prommathad and the occasions of the performances were Kao Sunat Ceremony, Bu Cha Tung Ceremony, and Nora Rong Kru yearly Ceremony. There were four postural dancing styles of the troupe: 1. Sitting (Kue Ngor Ba Ngung); 2. Standing (Ta Ree Ra Kam); 3. Courting (Ta Ree Nae) and 4. The conversation with a hunter. Nowadays, there are three forms of Nora Kaek: 1. The performance for rituals; 2. The performance as a form of folk entertainment; 3. The performance for demonstration. As for the style of the performance, there were four main features: 1. The first show-time depend on the prediction of the troupe headman; 2. The second round of the show will only be at night time; 3. There is no screen or partition on the stage. Performers will dress up on the center of the stage; 4. The Nora theatre has no seats or chairs offered; 5. Palai (A pray station) will be separated in to two parts. Therefore, the researcher found that there was a significant combination of the southern Nora performance and the Mayong performance in Pattani province. However, the performance developed and improved to serve the community’s need and to forge and fostere social relation.